This post should really be entitled ‘Lessons Learned while Long Distance Walking and Marking GCSE Exams’. It’s a less catchy title, but a more accurate summary of what this post is going to be about. Because for the summer of 2017 – so far at least – I have mostly been marking and walking.

The marking was the main subject of my June. I’d signed up to mark 300 AQA English Literature GCSE scripts (modern texts and poetry, if you’re interested) over the space of three weeks.

‘Easy’, thought May 2017 Emily. ‘I know teachers who do this on top of a full-time teaching job, and I’m only tutoring part-time. I’ll be able to do a few scripts every morning and spend my afternoons reading, writing and getting back into running again.’

June 2017 Emily did no reading or writing at all. June 2017 Emily did not get back into running again. June 2017 Emily forgot to clean her teeth or get dressed some days, and came to see leaving the house as a grand achievement, as she turned all of her attention to meeting her daily target of fifteen scripts, while bitterly cursing the name of any teacher who managed to do this on top of a full-time job.

It got easier, of course. I managed to pick up the pace, and by the third week I was confident that I would meet my 300 script target. I even started brushing my teeth, and went so far as to take most of the day off to go to London with my parents (though I did mark some on the train). But the easy bit wasn’t the interesting bit. The interesting bit that I want to dwell on was the first week, when I worked 9-5 to complete approximately five scripts per day, and yet never once questioned that I would somehow find a way to complete the task at hand. I became methodical about the solution, sorting through my diary to set realistic daily targets that would account for any plans I’d made, and using fifteen minute timers to keep myself on track. I accepted the possibility of late night marking sessions, and I experimented with different marking techniques to see which was most efficient. And in the end, I got the job done.

I don’t say all this to blow my own trumpet, but rather the opposite. Because if I can be so committed to marking 300 exam scripts for AQA, why am I finding it so hard to write a second book? Isn’t it ironic that I left full-time teaching to pursue my passion – writing – more fully, but find it easier to throw my energies into the trappings of the job I left behind?

And it’s not just marking.

The start of my July was spent, as I mentioned earlier, completing a long distance walk. Bright and early on Saturday 8th, Pete and I struggled onto a train from York, weighed down by day packs and 30kg of camping equipment, each bearing a one way ticket to the seaside. The plan – and it had been a plan of ours for almost four years – was to dip our booted feet into the Irish Sea, pick up a pebble from the beach at St Bees Head, and then to begin walking east. 192 miles would roll by, as we strolled through twelve long, light days of English summer before arriving in Robin Hoods Bay, dipping our still booted feet into the North Sea and casting our pebbles out into their new, more Easterly home. I envisaged the walks energising me with endorphins which would allow me to tapp into rich seams of creativity in my mind, which I would then channel into luxuriating prose in the evenings, nestled cosily in my camping chair, with the smell of campsite cooking and the bleating of sheep as my lullaby.

Well, I was right about the sheep at least. There were bloody loads of sheep.

Perhaps you understand miles better than me, but 192 is a lot of them: especially when you’re intending to walk them in twelve days. Perhaps you understand England better than me, but the route across the Lake District is not a route along which one ‘strolls’. The elevation involved in the walk is – apparently – the equivalent of ascending Everest. Write I did not. Tap into seams of creativity I did not. The Coast to Coast walk, we soon realised, was an endurance challenge. And that was without the added stress of camping, and the fact that we’d shaved two days off of the suggested itinerary length.

But we did it!

And don’t get me wrong, we enjoyed it too. It continued to be tough, yes, and there were lots of moments in which I struggled, ached and contemplated catching a bus, just for a few miles. But of course, that was never really an option. We had told ourselves we would complete the task, and complete it we would. And as anyone who has run a marathon will know – equally anyone who has moved to a new place where no-one knows them, or who has forced themselves out of bed at ridiculous-o’clock to rehearse or practise or train towards something – there are few better feelings than completing a task you once thought you couldn’t.

One of the teachers on my MA advised that we should work hard and set ourselves high standards, and that we’d be surprised by how much we could achieve that way. She is right, and I’m reminded of it every time I complete something that I once doubted was within my grasp. The achievement is an exhilarating and elating feeling; it expands one’s comfort zone, in such a way that the comfort zone can never shrink back.

So why can’t this knowledge be applied to writing a book?

Is it the lack of external pressure? I completed the Coast to Coast walk at least partly buoyed forward by the fact that I’d told people I’d do it, and it’d be embarrassing if I failed. It was the same emotion that pushed me to complete the marathon. But I’ve tried telling people that I’m writing a book – even giving them daily word targets and a deadline – and it didn’t work. No one really judges you for not finding the time to write a book.

Is it the intangibility of the result? The stages of the Coast to Coast walk are clearly laid out, and there are countless blogs on how to train for and run a marathon. The miles were hard, but none of them were unexpected. Writing a book, to paraphrase another of my MA teachers, is like trying to hack a path through a dense thicket with an axe.

Perhaps this is the big problem. It’s certainly the biggest shadow that looms over me during the process. As many flashcards and bullet points and character sketches as I scaffold myself with, there’s no escaping the fact that to write a book is to try and invent something that didn’t exist before.

But I have done it once before, and so this answer isn’t enough, on its own. And yet, funnily enough, the book I did manage to complete was only completed because I’d entered the first few chapters into a contest and lied about having finished the manuscript. There was a grand plan to complete it before the deadline, but of course, I forgot. Aspiring writers enter a lot of competitions, and the percentage of those entries which turn into rejection emails mean that it wouldn’t be healthy to eagerly remember them all. So when I received an email asking for the full manuscript – with a generous 14 days to make any final tweaks – I hadn’t gotten any further than the few chapters I’d submitted. But I dug deep, cancelled all my plans, replied gratefully to the email and finished my book in two weeks.

So perhaps external pressure is the key ingredient, after all. Perhaps it’s just about finding the right kind of external pressure. Maybe shouting into the darkness of the internet – in this instance – is more valuable than a supportive friend. My intention is, in this case, to use my blog to do just that – to chart the progress I hope to make. If you’re reading this and you’re struggling with the task of writing a book too, please do get in touch. Shouting into the dark is fun, but hearing a voice shout back is even better.

There are certainly lessons to be learned from AQA marking and long distance walking, which can be applied to writing a book. Break your task down into chunks. Give yourself enough time. Take pressure off yourself in other areas. Look at your previous achievements and realise how much you are capable of. Completing the task is better than deliberating over how to complete it best. And while preparation is key, sometimes, the only route to success is to keep putting one foot in front of the other. With lots of little steps, eventually, you can walk from coast to coast. And with lots of little words, eventually, you can write a book. Now I just need to take my own advice. 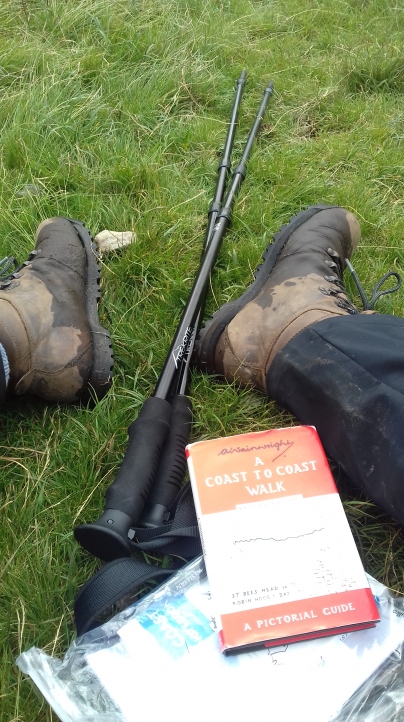 Have you ever noticed that often, when you put off a task, the problem becomes exponentially bigger? E.g. when you keep meaning to text someone back, or to start eating healthily, or to get back into writing on your blog, the longer you leave it, the harder it becomes to get back on the wagon? Well this is a short, sharp blog post, designed to end the long spell of ‘well my next post had better be really good.’

More soon, and hopefully more interesting than this.